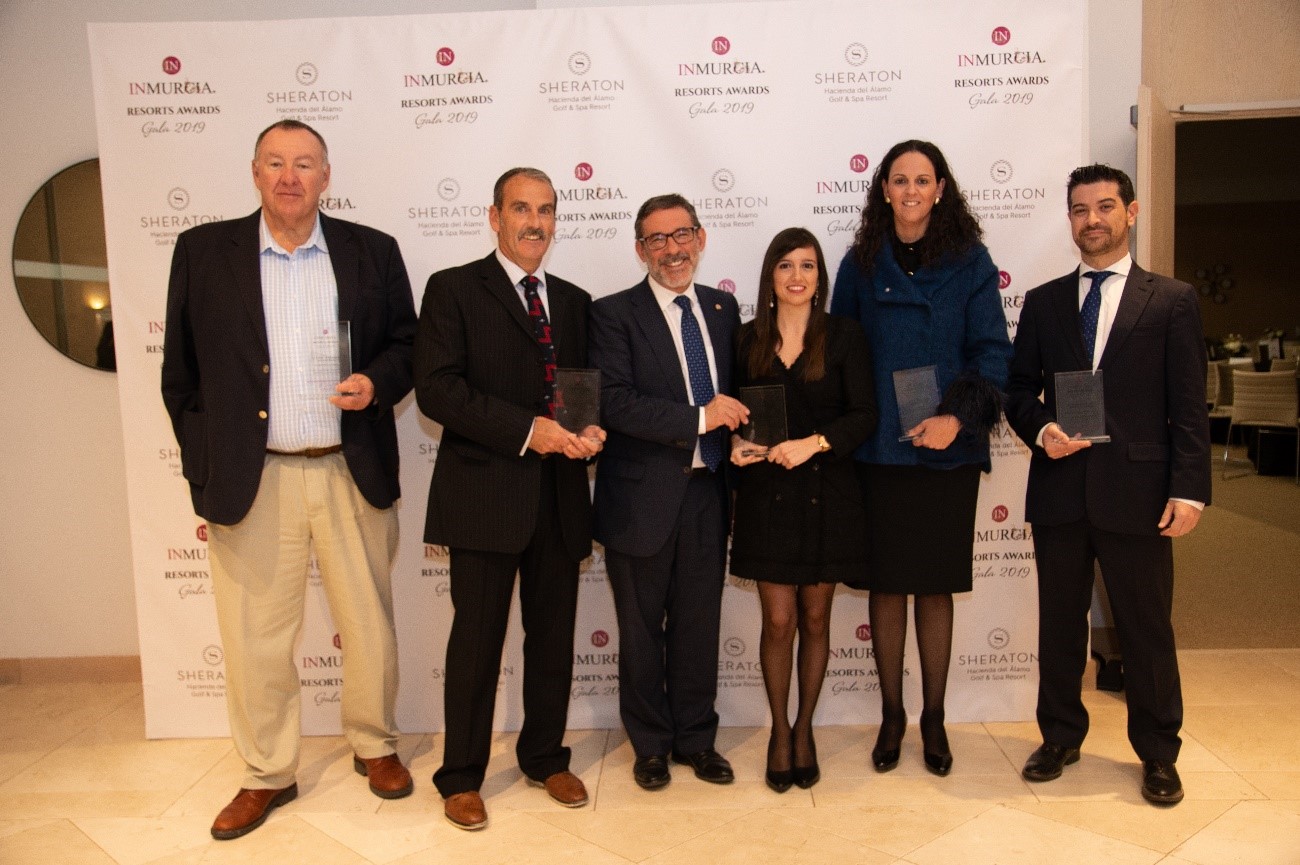 INMURCIA presented  last Saturday December 7th, its awards to residents and institutions that have added value or contributed to the improvement of the quality of life in the resorts.

“Our winners are the image and light that future residents and visitors will receive from our wonderful resorts and our lovely Region,” said Josefina Rabadán, editor of INMURCIA, during the presentation of the gala, which was held at the Sheraton Hacienda del Hotel Álamo Golf & Spa Resort and had attendees from different resorts in the Region of Murcia.

In this first edition, the INMURCIA RESORTS AWARDS had two categories: INSTITUTIONAL awards and LO MÁS IN awards, referred to different social groups,  communities of owners, residents associations of the resorts of the Region.

Peter Hutton, president of the General Community of La Torre Golf Resort, was the first to receive his award. The  second vice president of the Regional Assembly, Gloria Alarcón, was in charge of handing over the award to Peter Hutton for “the spirit of the community and solidarity during the DANA”

The second to collect the award was Paul Taylor, president of the General Community of Mar Menor Golf Resort for “the realization of the promotional video of the resort acheter viagra générique en ligne.” The prize was given by the editor of INMURCIA, Josefina Rabadán.

La Manga Club General Community was awarded a prize because the owners of this resort are “Decanos” resort management”. Faced with an unforeseen event that prevented them from attending, the award was colleted  by Catherine Devries, from the INMURCIA Honour Committee, to deliver it later

The  Hacienda del Alamo festivities committee received the award for “the organization of the celebrations of the resort and the festive spirit of its members”. The president of the committee, Miguel Tomás Peinado, received the award from Francis Lemmens of the Honorary Committee of INMURCIA and resident at Mar Menor resort.

In the INSTITUTIONAL   category, the winners were the City Council of Fuente Álamo, the Regional Government Ministry of Development and the Government delegate of Spain in the Region of Murcia, Francisco Jiménez Jiménez.

The mayor of Fuente Álamo, Juana María Martínez García, collected the award given to the council for the appointment of a municipal delegate for Hacienda del Álamo Golf Resort, the beloved Ángel Navarro. The award was persented to the Mayor by Sandra Maclean, of the Honour Committee of INMURCIA and resident in Hacienda del Álamo.

The last award was, granted to the delegate of the Government of Spain in the Region of Murcia, Francisco Jiménez Jiménez he received the distinction of INMURCIA for “his work from the heart during the DANA  and brexit”. His award was handed over by Gillian Kirk-Bushnell from the INMURCIA Honour Committee and resident at Mar Menor Golf Resort.

At the end of the awards ceremony, a cocktail party took place where the winners talked in a relaxed manner with the attendees while enjoying a selection of classic songs in English and Spanish that Laly a singer from Cartagena interpreted with her elegant voice.