The president and the residents 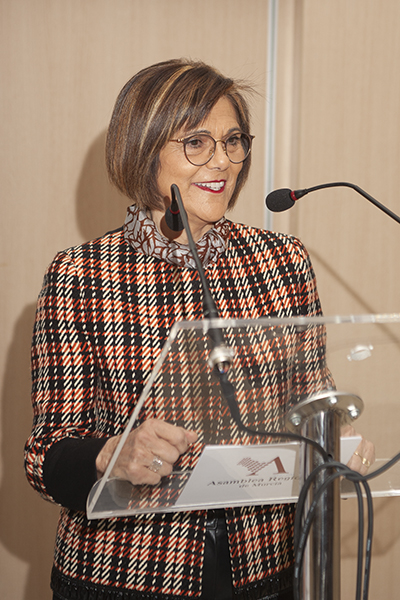 An enthusiastic welcome. More than a hundred residents of different resorts had a splendid experience with the visit made by Rosa Peñalver, president of the Regional Assembly of Murcia, hand in hand with INMURCIA.

This meeting fulfilled the desire expressed by Rosa Peñalver to know more about this heterogeneous group of different nationalities that make up the residents of the resorts and bring the parliamentary institution closer to the citizens, as she told the director of INMURCIA, Josefina Rabadán, during the visit to the Assembly that was made by a group of representatives of these resorts.

The meeting, which took place at the recently inaugurated Sheraton Hacienda del Álamo Golf & Spa Resort, is part of the activities organized by INMURCIA, the social communication initiative whose purpose is to promote the lifestyle of the inhabitants of the resorts of the Region.

When the president arrived at the Sheraton Hacienda del Alamo Golf & Spa Resort, there was already a large audience waiting for the start of the event.

The members of the Welcome Committee of INMURCIA, made up of Rosamund Cheshire, Niek Kottink, Sandra McLean, Sacha Kottink, Caherinne Devries, Gilliam Kirk-Bushnell and Josefina Rabadán, accompanied by Angel Navarro mayor of the HDA,  Antonio Jesús García, Mayor of Fuente Álamo and Eva Delacruz from the Sheraton, gave her a warm welcome at the door.

After the necessary photos taken of the welcome, the delegation proceeded to the room where the event was held.

There, after the words of the Antonio Jesús García, Mayor of Fuente Álamo and Ángel Navarro, the resort’s mayor, was it the INMURCIA’s own director, Josefina Rabadán, who welcomed the more than 120 attendees from different resorts, Hacienda del Alamo, Altorreal, Mar Menor, La Torre, El Valle, Condado de Alhama, Country Club, Hacienda Riquelme, Terrazas as well as guests of the Region and she explained the philosophy of INMURCIA. It is a social communication initiative in which more than 40 nationalities, which works constantly to maintain the diversity of its cultural program, and to make it attractive both for residents and the rest of Murcia.

It was up to Rosamund Cheshire to present Rosa Peñalver to the audience. Rosamund, who took the trouble to make her speech in Spanish and English, highlighted as one of the features of the president her intellectual curiosity, a trait of insight that has been what has driven her to make space in her complicated agenda to be able to attend this meeting.

The president had an agile and didactic intervention that overflowed frankness and empathy. Rosa Peñalver explained, to an audience composed mostly of foreigners, how the current situation of  Spain, with all her autonomous regions was conditioned by the country’s most recent past. Peñalver, who made a plea in favour of constitutionalism, ended her speech with an invitation to INMURCIA to organize a visit of residents of resorts to the Regional Assembly. 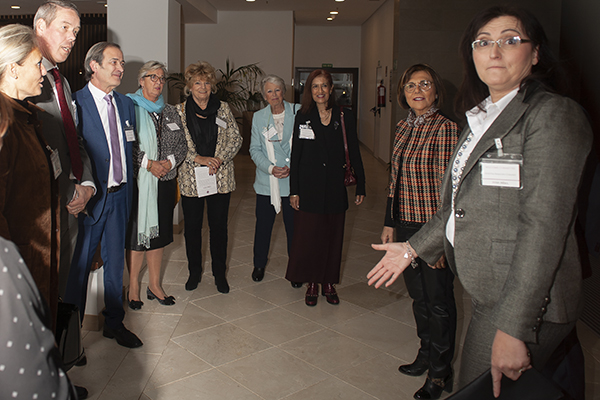 Niek Kottink, president of the fiesta committee of Hacienda del Álamo, in a brief speech, which he also did in English and Spanish, thanked the president for being so didactic and opened the question time, and also invited the attendees and everyone to attend the fiesta at the HDA resort which will be form the 7th  till the 9th of June.

The attendees presented the president with questions as diverse as Brexit, water and taxi laws. And Rosa Peñalver, although it was about issues that are outside the legislative powers of the Assembly, did not elude any question and responded sincerely and clearly.

At the end of the questions, Sandra McLean, president of the Women’s Association of Hacienda del Álamo, on behalf of the welcoming committee of INMURCIA handed over to the president a painting of a sea side, by Murcian artist Nares Diaz, which evokes the light of the Mediterranean; the same light that, in the words of Sandra McLean, left the president’s visit among the residents.

A Spanish guitar recital, by Nares Dīaz himself, served as a preamble to the part of “sharing the good life” that INMURCIA always incorporates into his acts.

And there was still a surprise out of the program. Sacha Kottink, Director of Marketing & Events of INMURCIA and member of Cava Club, talked about how friendship is the leitmotif of this group of different nationalities and cultures as we saw in the video. SHARING THE GOOD LIFE !!

Finally after an enthusiastic applause to the President we went to the cocktail where all the attendees had the chance to personally meet with Rosa Peñalver.

We left, with a nice taste and never better said with a wonderfully prepared cocktail served by Sheraton.

We could not end up better then with our hymn: