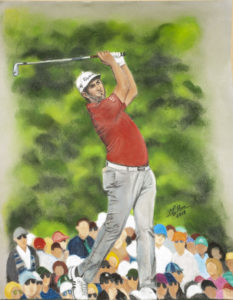 Jon Rahm Rodríguez is not your normal, run-of-the-mill guy. Those who know him will say he is a “genius”, that he has a gift and is, without a doubt, one of the best golf players in history, comparable to Tiger Woods and Jack Nicklaus.

Jon Rahm, 23, (born 10 November 1994), recent winner of the Spanish Open 2018 was, last year, also winner of the Irish Open European Tour and Farmers Insurance PGA Tour amongst other tournaments. He is, today, one of the rising stars in the world of golf thanks to his meteoric career and a bright future. A golfer who success has not changed, somebody that continues to seek happiness in everyday life and who could soon become one of the best golf players of all time. There is no doubt that this Euskaldún (Basque) with immense self-confidence and a kind face has always been, as he himself admits, very restless, even as a child. “He was always two hundred percent sure of his game”, say his companions. Jon was sure he was going to win this year’s Spanish Open and he did: “Even when he was 14-years-old, he was head and shoulders above the older players at his club”, it has been said. However, nobody could have imagined then he would be capable of making such a spectacular leap in such a short time, becoming one of the ten best golfers in the world in just one year. But he did! He had always known he was going to be one of the best!